Eleanor’s Grandfather was a butcher – a small, stocky Greek man with the biggest smile and the shortest fuse. From him she had learnt and taken to heart the necessity of keeping a blade sharp; and she loved to watch him sharpen his tools on the leather strop that hung against the whitewashed wall of the shop. When her father took over the business and insisted on upgrading to an electric sharpener, Eleanor had asked if she could keep the leather as a memento of the happy memories watching her Grandfather.

She was twenty three years old and an hour after the leather was placed into her custody, she was on her hands and knees in the back of Jay’s tiny, rickety car with her panties around her knees as he beat her. She could picture the galaxy of bruises he was painting, beating into her flesh. The pinks that became purples that became blues and greens criss crossing her backside.

He took photos of the damage and then withheld them for a month – Would flick through the SD card as she sat next to him on the sofa, feeling them fade, ache away from her skin – and tease her with how much she had sustained, and the shiny dampness of her inner thighs. Sometimes she’d suck his cock as he did so and he’d come over her face, calling her every filthy and depraved name under the sun.

Jay understood her need for pain, for brutality. Richard only understood his own narrow needs, brutal in their own way but not through sadism, only through selfishness.

This was what crossed Eleanor’s mind from her position on the prow of the boat. Her hair was wet, and with her legs crossed beneath her, she half-knew she looked like a bored mermaid carved into the wood. Bored, but beautiful even though Elizabeth was always told she was the prettiest, the best, the cleverest. And Elly accepted it because she adored her sister beyond all measure.

Their mother had had her first daughter in her teens – by the time she felt ready to fill in the rest of her family, Elizabeth was almost ten, but tall for her age – sometimes when she took baby Eleanor out in her pram, unkind people would assume she was a teenage mother and be cruel. Elizabeth would tell them to fuck off in the sweetest, most melodious voice and the noise would make baby Eleanor smile.

Sisters, sisters. There were never such devoted sisters

Their mother would sing this to them often. And it was true. Of course they fought, and when Elly hitting puberty coincided with Elizabeth (always Elizabeth, never Lizzy or Beth) away at university, she would tiptoe into her older sister’s room and try on her clothes, painting her face with what Elizabeth would yell were expensive cosmetics but were really only drug store bargains. Always easily forgiven. Always stepping up for one another.

It was Elizabeth who brought her her first vibe – “Because I know you’ll just start using mine if I don’t” she grouched as she handed over the pristine box.

Later, they would discover that he was married, and that Elizabeth – and much later Elly – were just the latest in a long line of women he’d pick up and discard at will. He collected women like other men collected old football magazines or classic cars. He’d never collected sisters before, though. Sisters were new.

“Jay.” He murmured, extending his hand out to her. “You must be Elizabeth’s little sister.”

Lord help the mister that comes between me and my sister

She giggled and let him envelop her tiny hand in his. He was so big and powerful. She wanted him. From that moment, she was determined to have him.

And Lord help the sister who comes between me and my man.

To be continued… Smut Relay Part 6 by Posy Churchgate

The Smut Relay is run by Rebel’s Notes and involves each author writing a part of the story and then passing on to the next person. If you haven’t checked it out yet, you can begin at the beginning The Forbidden Beach by Marie Rebelle 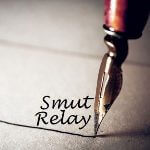 Published in D/s, Filth, I wrote this and Smut Relay

This site uses Akismet to reduce spam. Learn how your comment data is processed.